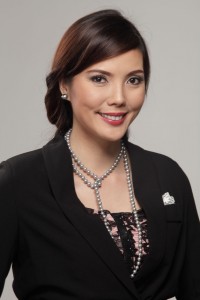 Carol is a former runway, print & commercial model for projects such as American Standard, Wella International, Sunsilk Taiwan, Coca-Cola Vietnam, Emporio Armani, Louis Vuitton and Mastercard among others. She co-hosted Philippine celebrity talk show “Oh No! It’s Johnny” from 1997-1999. Carol is a Cum Laude graduate of Bachelor of Arts major in Communication Arts from the University of Santo Tomas. She is also a PRC Licensed Real Estate Broker from 2006 used to be connected with Antel Group of Companies, and now with Megaworld Corporation from 2017 to present. Her extensive travel overseas in Asia, North and South America has helped shape her diplomatic experience as well as her sales work exposure with BMW Philippines from 2005 – 2007 handling the expatriate market. She’s an alumna of John Robert Powers International and has been its active consultant at the school for 16 years making her areas of expertise fit for One-on-One Coaching, Group Training and Corporate Image.

She is a Certified Image Professional (CIP) and a member of the Association of Image Consultants International (AICI). In 2011 ENHANCE YOUR IMAGE Training Consultancy was formally established. Also a writer contributor for AICI Global Magazine from 2014 to present, among the contributions to the AICI Philippine Chapter include the following:

Last 2016, we’ve added another accomplishment being the first image consultant to be the Institute of Image Training & Testing International (IITTI) Associate for the Republic of the Philippines, with the pioneer batch passing the international exams last 31st August 2016.

“IMAGE naturally exists in each person. Underneath the surface, with the right knowledge & proper training, one can learn to believe and discover the true value within. This once brought outward will certainly exhibit a most beautiful individual.” – Carol